The Rhône River is the main supplier of suspended particulate matter (SPM) to the Western Mediterranean Sea. These SPM come from tributaries and sub-watershed that are very varied in terms of :
– hydrological regimes (from nivo-glacial to oceanic rain or Mediterranean storms),
– sediment production (slope erosivity, connectivity of the hydrographic network),
– and particle characteristics (size, organic matter rate).

All these SPM are mixed in the hydrographic network, are eventually stored and taken back in the alluvial margins and dam reservoirs, and are finally exported to the marine environment, especially during floods or dam flushing. Once at sea, these SPM are redistributed in the Gulf of Lion under the forcing of currents and storms to end up being stored in coastal areas, on the continental slope to the submarine canyons that follow it. 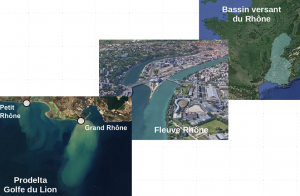 Water and sediment fluxes exported to the sea are the main vectors of dissolved and particulate contaminant flows from the continent to the sea. Their current and future dynamics are linked to high issues, but it remains difficult to assess from observations alone.

The ContinuumMES action aims at providing answers on the dynamics and fate of water and SPM fluxes from the source sub-catchment to the river and marine receiving environments by relying on existing observatories and numerical models.

Different numerical modeling tools for water and sediment fluxes have been developed independently on the three domains:

An integrated modelling approach by chaining models within the same modelling platform is being carried out in order to provide new answers, at high spatio-temporal resolution, to the questions of the origin and fate of water and SPM fluxes at the scale of the land-sea continuum. The chain of models will be validated on present time events and will allow the simulation of prospective scenarios (climate change, impacts on hydrological regimes, marine conditions, reservoir management, etc.). Beyond the interest for the management and the knowledge of the environments, this action is a first scientific to apply in chain such models at this scale, from the producing watersheds to the marine receiving environment.