Transverse mixing coefficients are key to predicting the efficiency of pollutant dispersion in rivers. While most studies deal with relatively homogenous river reaches, the literature review indicates that shallow, gravel-bedded rivers with longitudinally-varied bed, such as the Durance river, are still poorly documented. The overall transverse mixing coefficient of a reach with varied hydraulic parameters could be estimated as a combination of the coefficients of more homogeneous sub-reaches.

With many geometric and hydraulic parameters that can affect the transverse mixing in river, such as roughness and macro-roughness/emergent blocks or vegetation, aspect ratio, discharge, meanders, etc, it is an invitation to rank the impact of those parameters in order to represent best the mixing in river through a simplified model. Complementary approaches are to be applied: 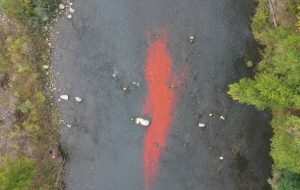