The use of acoustic Doppler current profilers (ADCPs) has increased to measure water discharge in rivers. Technological development has enabled the use of the ADCP in both shallow streams and deep rivers.

Given the use of ADCP measurements as inputs in indirect real-time flow monitoring and in decision-making activities related to water resources the uncertainty has to be estimated carefully. Previous studies have shown that the average bias of ADCP discharge measurements is negligible. However, even when good measuring practices are followed, the uncertainty of moving-boat ADCP streamflow measurements is attributable to various errors sources including errors due to the instrument, the discharge computation or errors that depend on the measurement conditions such as site-specific effects or operators.

Uncertainty analysis aims at providing relevant information for decision making and eventually for refining the measurement process to reduce the uncertainty.

The project aims at estimating the uncertainty of moving-boat ADCP following twho methods: 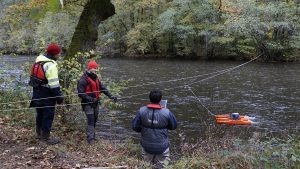 An analytical method, named Oursin, is under development. It is planned to be implementing in QRev software (developed by the USGS) in order to provide an uncertainty estimate.

To decompose the uncertainty of ADCP streamflow measurements, a large repeated measures experiment was conducted in France in 2016 (see: https://irsteadoc.irstea.fr/oa/PUB00055007-inter-laboratory-comparison-discharge-measurements.html). 48 teams circulated over two sets of 12 cross-sections while the flow rate was released constant from a Dam. A two-way ANOVA was applied to quantify the cross-section effect, the operator effect and their interaction, which was found to dominate the pure cross-section effect.

Lastly, a confrontation between inter-laboratory experiments and analytic methods (OURSIN, QRev, RiverFlowUA, Quant, QMSys) will be investigated. It will possibly identify potential improvements of their respective uncertainty components estimates.

This study is funded by SCHAPI and supported by the Groupe Doppler Hydrométrie (https://gdh.irstea.fr/) which gathers French-speaking ADCP users.