Solution NaCl is a software program that calculates the instantaneous discharge of a watercourse when using the salt dilution “global” or “instantaneous” method. This gauging method consists of injecting a salt tracer solution into a watercourse and monitoring on a section downstream the temporal evolution of the conductivity, and thus indirectly of the salt concentration. The temporal integration of the concentrations of added salt makes possible to determine a dilution rate that is proportional to the flow discharge. The salt dilution global method is described in a video tutorial.

The software is equipped with a graphical interface that allows to import the gauging data from the field (calibration and conductivity time series) and to graphically select the boundaries of the conductivity cloud. The salt concentration and then the flow rate are then automatically calculated, respectively by using the calibration data established in-situ and by entering the quantity of salt injected. In addition, the software offers the possibility to export a report in text format, gathering metadata and the results of the gauging. 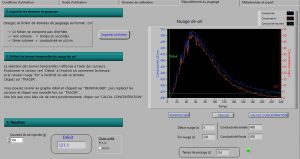 The software is freely available here.