An alternate bar system is a typical morphological pattern that appears in rivers characterized by a significant sediment input and largely constrained by dikes. Alternate bars are wave patterns, of which the crest and trough alternate between the banks of the channel or river (Knaapen et al, 2001). They are generally described by the aspect ratio (width to water depth) of the river. They can either be developed spontaneously due to an imbalance in the flow-bed system (free bars) (Tubino et al 1999) or by a physical constraint that may be introduced as an obstacle along the river cross-section like bridge piers or any other engineering works (forced bars) (Crosato et al 2020). The wavelength of alternate bars is typically of the order of several river width (B). Engineered alpine rivers are often characterized by alternated bar system and substantial sediment transport, particularly of fine sediments (clay, silts, and sands). The deposition of fine sediments increases the gravel bar aggradation and initiate the growth of riparian vegetation. Such evolution may enhance the flood risk in the mid and long-term.

Once a forced alternated bar system is created in the flume, then fine sediments will be introduced into the system for different hydraulic (discharge, slope) and sediment conditions (influx, grain size, etc.).  These experiments will be conducted with specific attention to the effects of unsteady flow, and more precisely, the shape of the hydrograph on fine sediment deposits. Also, the effect of porosity on fine sediment deposition and erosion dynamics will be determined. For this, the comparison of the experiments on both mobile porous bed (made of gravel) and the impermeable fixed bed (build artificially using a 3D printer) will be done. And in the end, the impact of the clogging extent on bar morphodynamics will be quantified. 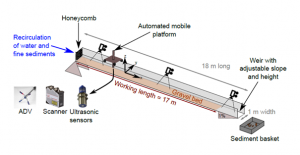